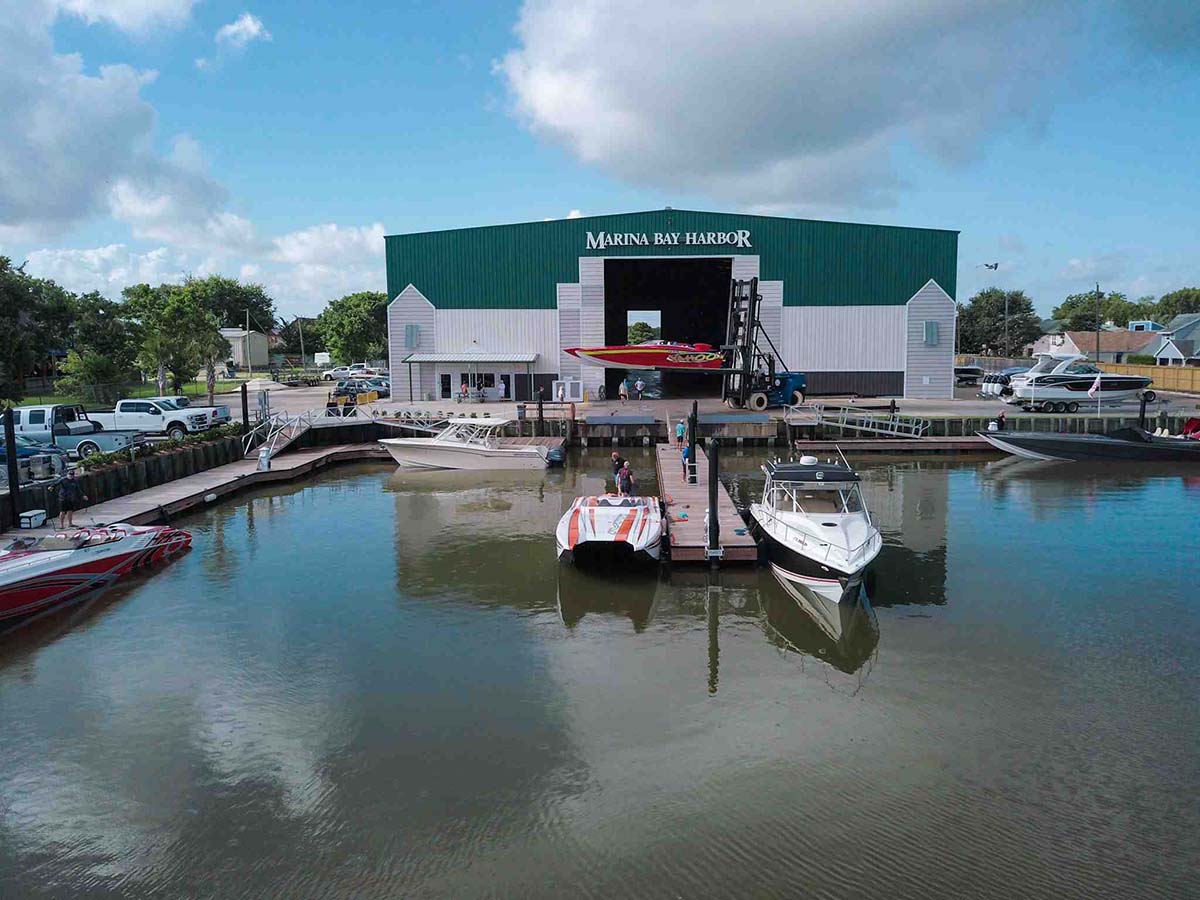 Since it bought Marina Bay Harbor Marina in Clear Lake, Texas, VIP Marinas has been upgrading and improving the dry stack facility. The company’s goal is to create a premiere, best-in-class, top-service dry stack marina in an area that has the third largest concentration of registered pleasure boats in the U.S., according to owner Austin Cameron.

When VIP Marinas took over the facility in January 2021, the marina was in a state of disrepair. The previous owners had not addressed the damage that the docks sustained from two hurricanes, and the concrete was so broken up and full of holes that it was impossible to drive on in some areas. There was no ship store, no ice and no fuel available. While the dry stack facility was still in excellent shape, the rest of the marina was rundown.

VIP Marinas hired John Judice, who had worked at the facility as a teenager, as the marina’s new general manager. He oversaw all the upgrades and improvements, including the repair of the concrete, the removal of the old docks, and the installation of new floating aluminum docks with ipe decking, which were built by Flagship Dock Services of Lake Travis, Texas.

“We have about 400 extra feet of dock space than we did previously, and we extended the launch dock from 50 feet out to 72 feet. We can now accommodate about six medium-sized boats, where before we could only handle about two,” said Judice. To improve the efficiency of the launch process, the docks were designed without finger piers; marina workers can launch the boats and walk them all down to the very end of the dock.

Judice has upgraded the overall look of the marina with new landscaping (including palm trees), a newly renovated parking lot plus additional lighting and security. In addition, the marina staff now runs a floor scrubber twice a week to keep the dust down in the facility.

Marina Bay Harbor Marina also purchased a new large forklift, a 35,000-pound hoist Neptune, and already has a 30,000 Wiggins Marina Bull. This will enable them to handle boats up to 47 feet long. With the new forklifts, the marina is able to offer dry storage for larger boats that didn’t previously have that option in Clear Lake, as well as hurricane storage for boat owners who want to get their vessels out of the water for the duration of the storm.

The marina now includes a small ship’s store that sells clothing, beverages and live bait, which has been popular with area fishermen. Families with kids particularly enjoy the ice cream that’s sold at the store. Dry slip holders also have access to bathrooms and showers 24/7. A new fuel system that sells both ethanol fuel and, in response to customer demand, non-ethanol fuel has been installed. “Non-ethanol fuels have been big for us; we’re actually selling more non-ethanol premium fuel than ethanol regular,” Judice said.

To provide valet-style service, Marina Bay Harbor Marina now offers an app that allows its customers to select the time that they want to be in the water, the amount of fuel they want in their boat and any snacks or ice that they want placed aboard. “When they get to the marina, they can just hop out of the car and jump right onto the boat,” Judice said.

In the coming months, Marina Bay Harbor Marina plans to add additional docks to provide more space for transient boaters and for customers that want to keep their boats in the water for a few days. It will be building a larger ship store, and will be opening a new service center as well. “We want to be the number one service center in the area, a place where people can bring their boats in for anything they need and we’ll get it done for them in a timely manner,” Judice said.

Boaters in the area have responded favorably to all the changes. In just 10 months, Marina Bay Harbor Marina has gone from 40 percent occupancy to 91 percent occupancy. The marina has also developed partnerships with the Clear Lake Boat Club and TOPPS Boat Club.

Want to join the discussion?
Feel free to contribute!